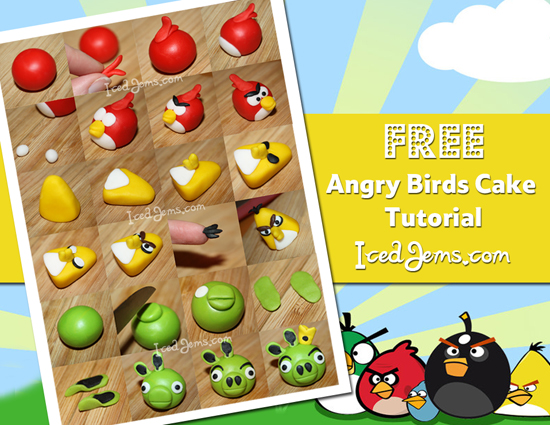 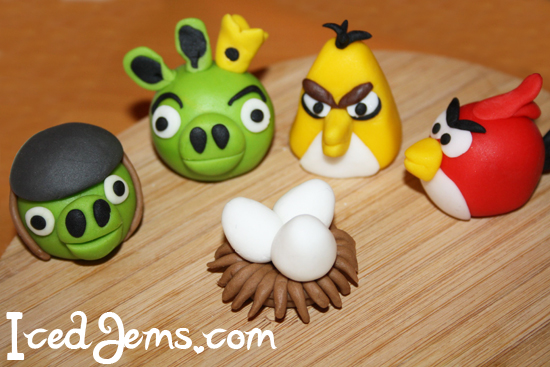 I made a cute Angry Birds Cake a few weeks ago, and I managed to photograph myself making all of the characters so I thought I would share the tutorials with you!

The Characters are all made from Fondant Icing / Sugarpaste Icing and are all 100% edible!

First up is the Red Angry Bird! 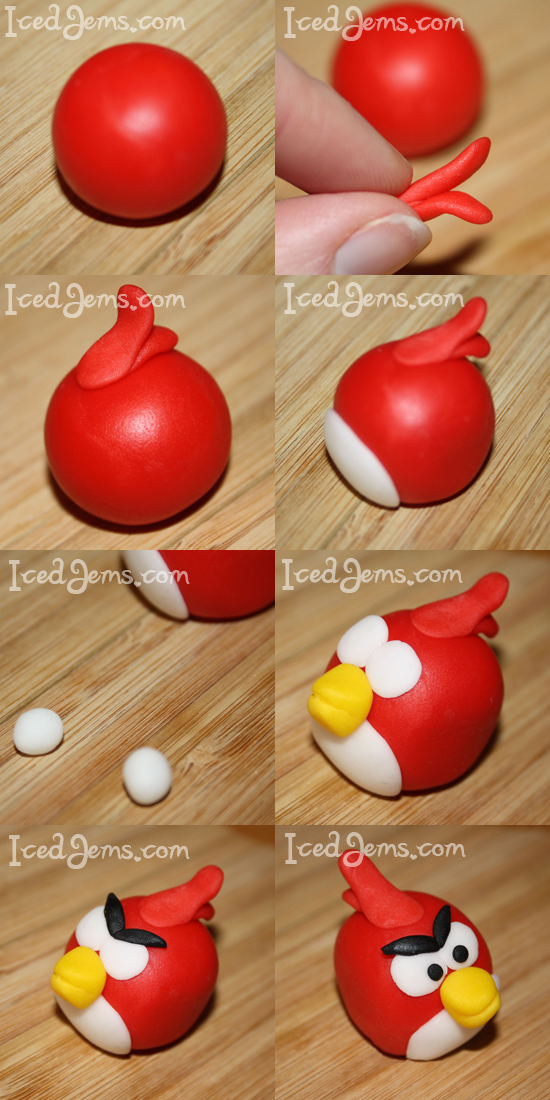 Start by rolling a small ball of Red Fondant Icing, about 4cm diameter.

Roll two tiny bits of Red Fondant in sausage shapes, then flatten them and pinch together at one end to make the Feathers for the top of the head. Press these on top of the Ball of Red Fondant on the pinched end.

Roll a small ball of white Fondant Icing and flatten into a circle shape. Press this onto the bottom of the Red Fondant Ball for the tummy shape, flattening the edges down to secure.

Roll two tiny balls of White Fondant for the eyes and press onto the Red ball below the feathers / hair flattening down.

Make a beak out of Yellow Fondant, moulding a thick triangle shape then cutting in half with a knife. Then stick this onto the red ball between the eyes and stomach.

The eyebrows for me were the part that really made the birds angry! Just roll two tiny sausage shaped out of Black Fondant and pinch the end so they have a point at the end. Then add two dots of black fondant for the eyes and your first Angry Bird is finished. 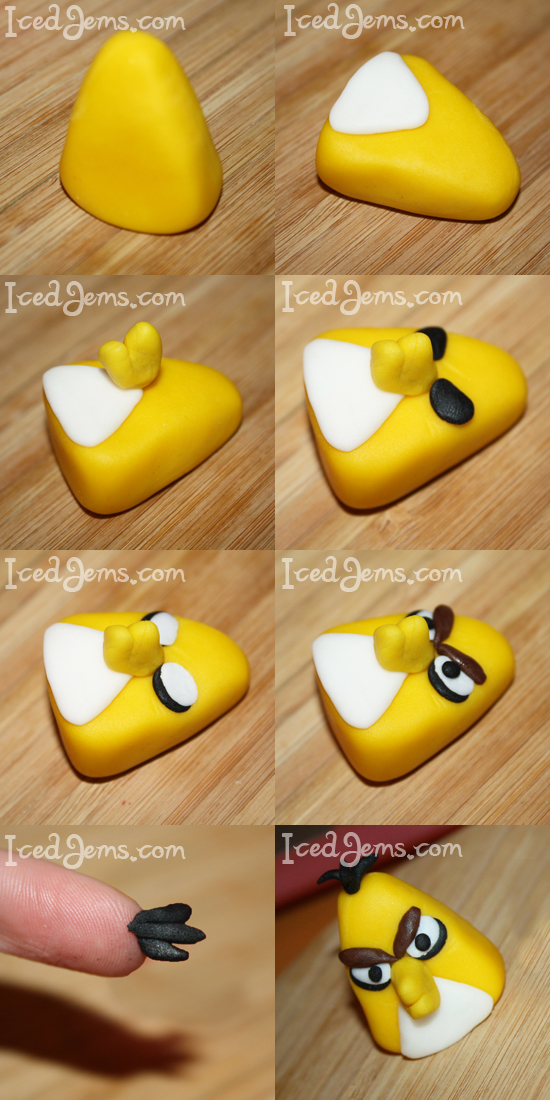 To make the Yellow Angry Bird, make a thick triangle shape (about 5cm high) out of Yellow Fondant Icing. Flatten the top slightly so it doesn’t come to a point.

Make a small thin triangle from White Fondant Icing, and press this onto the front at the bottom, this will be the stomach.

For the beak, make a small thick triangle shape and cut it from top to bottom using a knife, press the base onto the top of the white triangle.

For the eyes, start with two black ovals either side of the beak, pressing down to secure. Next add two white ovals, the same size but slightly higher so they have a black underline. Top with two black dots for the eyeballs and two brown sausage shapes for the angry eyebrows.

To finish, add three tufts of black hair / feathers, I rolled three tiny sausage shapes and pinched them together at the base, then pressed down onto the top of the yellow Angry Bird. 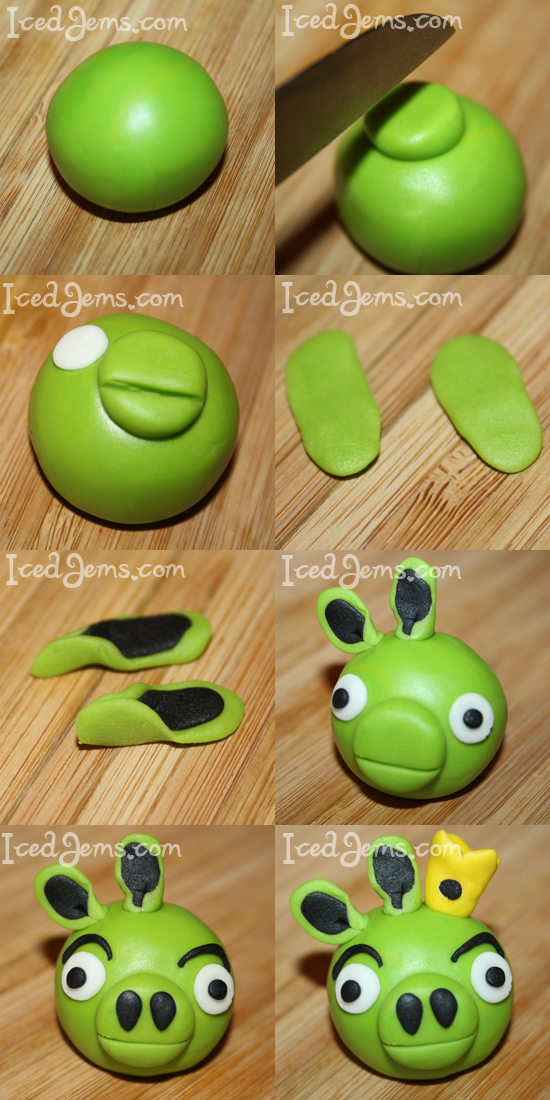 Next I made the King Pig! I mixed Yellow and Green Fondant together to get the perfect colour.

Start by rolling a ball of green Fondant Icing, about the sam size as your red Angry Bird.

Next roll a smaller ball and flatten it into a disc shape, pressing into the front of the larger green ball. Using a knife, cut through the smaller disc shape about two thirds of the way down to give the illusion of a mouth.

Add two small White Fondant Circles either side of the mouth shape for the eyes.

For the ears, roll two green fondant sausage shapes and flatten down, topping with two smaller black sausage shapes, flattening down again. Pinch the bottom of them and press them down onto the top of the green ball, at an angle slightly to allow room for a crown.

Now for the details, add two small dots of Black Fondant for the eyeballs, two small ovals above the mouth line for nostrils, and two curved sausage shapes for the rounded eyebrows.

To finish, make a crown from yellow fondant. I simply made a tube shape, pinched four peaks at the top and added a small black dot for detail. I then pushed this onto the top of the green circle to secure. 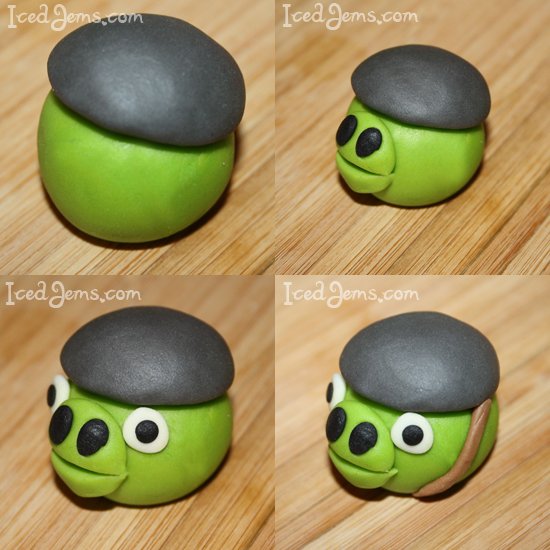 If you want to make one of the Pigs with a helmet, I’d recommend starting with the helmet before you add the facial features. Create a large circle of grey fondant, and place it on top of a green ball of fondant.

Next add the snout, by adding a disc shaped piece of green fondant just below the helmet. Add the nostrils, mouth slit and eyes as you did with the previous Green Pig.

Finish by adding a Helmet Strap make out of brown fondant going from the sides of the helmet to the bottom of the pig. 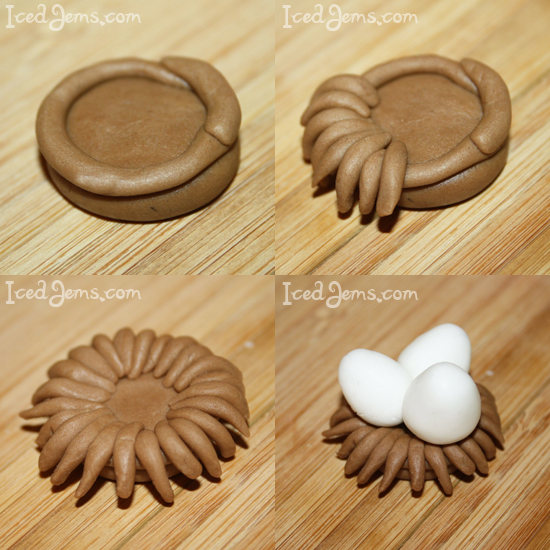 I also made a mini birds next with eggs for the Pigs to guard from the Angry Birds. This was so simple using just brown and white Fondant Icing.

Next I rolled lots of tiny sausage shaped bits of fondant icing and placed them around the edge.

Then I simply made three egg shapes from White Fondant and placed on top of the nest. 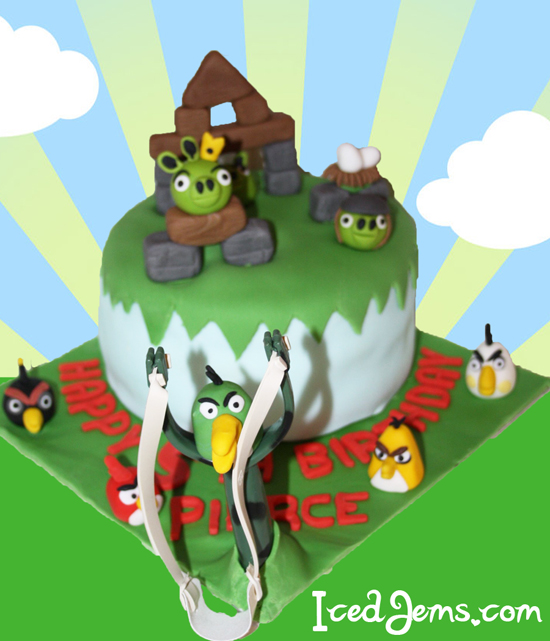 I then covered a basic round sponge cake in Green and Blue Fondant Icing, and placed the characters (plus a few more) on and around it!

I hope you find the character tutorials useful! If you’re not feeling up to making the characters for a cake, you should try using the Angry Birds Plunger Cutters in my shop! 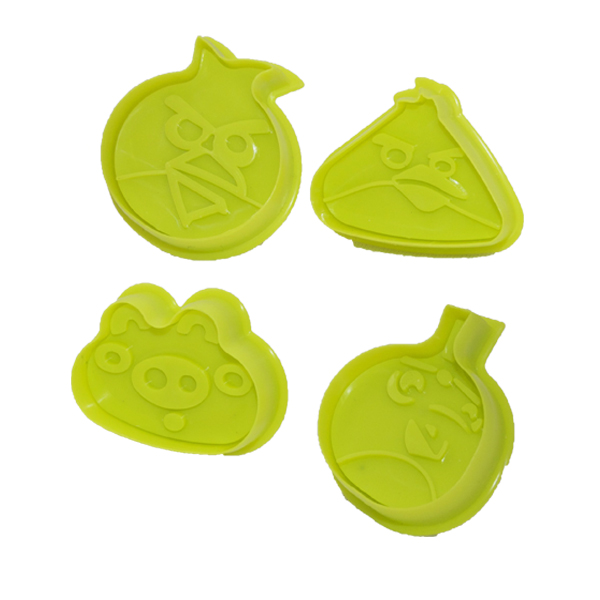