I hope you enjoyed the Skeleton Cookie Tutorial I posted earlier this week! I thought I’d share with you 5 ideas from my Halloween table last year, they are all quick and easy to do!

These cute brownies are so simple to do! The brownies are made using my Chocolate Fudge Brownie Recipe (Click Here to go to it) and the Ghosts are made by popping a Marshmallow on top of each brownie, then covering with melted White Chocolate. I then did the faces with a bit of melted milk chocolate – how simple is that? 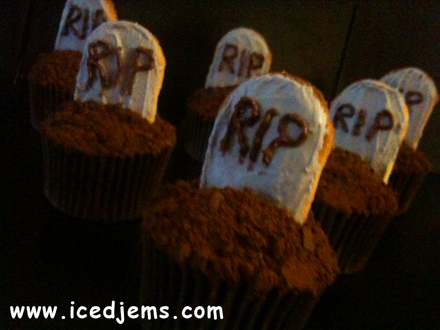 I’ve seen a few of these cupcakes on various sites, here’s my take on them last Halloween. I simply used a basic cupcake recipe (I’m sure you have your own favourite) to make the cupcakes, then covered them with a layer of buttercream. I then dipped the buttercream into crushed Oreos to gvie the “dirt” effect. For the Gravestones I used a roll out cookie mix and cut out the Gravestone shapes, but made them much longer than you can see in the picture, as they were pushed into the cupcake allowing them to stand up. I then iced using Royal Icing. 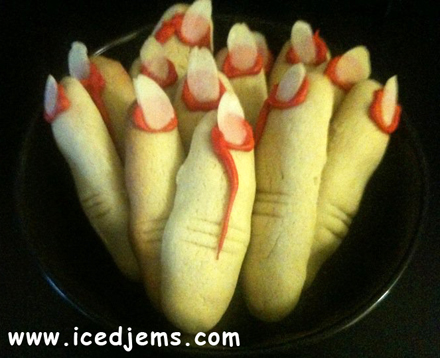 These were great for creeping people out, especially the flaked almond fingernail! I simply used the leftover roll out cookie mix from the Gravestone Cupcakes and make sausage shapes (not too thick as the will flatten slightly when cooked). I then made 4 grooves with a knife where the finger joints would be. After baking, I added a little Red Royal icing to the top and used this to attach a Flaked Almond for the fingernail!

I love the simplicity of these – I made mini cupcakes this time, then simply covered them in white Royal icing (but you could also use simple Glace icing). I then attached a Liquorice Allsort for the centre of the eye. One the icing is dry, use Red Food Colouring and a cocktail stick to give the bloodshot eye effect. 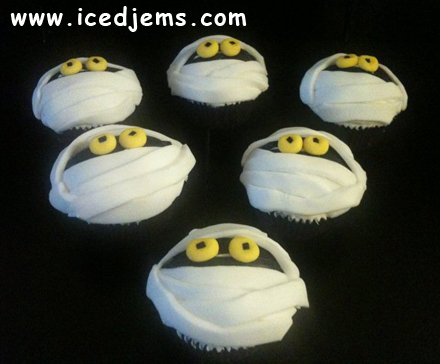 These went down a treat, not sure how I managed to make mummies look cute but I love them anyway! These were created using Fondant / Roll Out icing – available from most Supermarkets. Create a black strip where the eyes will be, then attach 2 yellow circles with a black dot for the eyes. Then simply cut out various sized strips of White Fondant icing and place all over until the rest of the cupcake is covered – simples!

Check out the Gingerbread Skeleton Cookie Tutorial I also did for Groupon by Clicking here.